A residential real estate brokerage known primarily for its work in mountain communities is strengthening its presence in Denver.

Slifer Smith & Frampton Real Estate is planning an aggressive expansion of its general brokerage services that could result in its Denver operation growing to nearly 40 brokers over the next few years, the company told Denver Business Journal.

The brokerage has tapped Brad Arnold, a former development partner at parent company East West Partners, to lead the Denver expansion as executive vice president and managing broker. Arnold said he aims to bring on 10 brokers this year, adding to a current roster of seven that includes himself. Slifer Smith & Frampton currently has more than 250 brokers across 33 offices in Colorado.

Slifer Smith & Frampton brokers executed $3.6 billion in sales in 2020, a 57% increase from the previous year. Most of that production was concentrated in Colorado’s mountain communities, where the brokerage was founded in 1962 by Rod Slifer.

To date, its Denver operations have mostly focused on selling East West Partners projects such as Riverfront Park, Buckley Row in Lowry and the Coloradan, a 334-unit luxury condo project in the Union Station neighborhood that sold out last February.

The brokerage has had a presence in Denver for 20 years, Arnold said, but the Slifer Denver arm previously had a separate ownership structure and acted independently of the larger Slifer Smith & Frampton.

The two entities officially merged on Dec. 31, setting the stage for a more unified approach to growth in Denver, said Arnold.

Slifer Smith & Frampton currently has offices at Riverfront Park and the Coloradan, both of which will be extensively remodeled in the coming year. Arnold also envisions future outposts in Cherry Creek, the Greenwood Village/Cherry Hills area and potentially as far north as Boulder and as far south as Castle Rock. 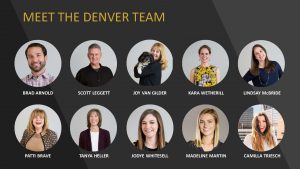 Arnold said he hopes to maintain a boutique family feel, but with the resources of a much larger group. Slifer Smith & Frampton is also a founding member and partial owner of Forbes Global Properties, a recently launched platform that connects buyers to homes across the world, as well as the agents who represent them.

“To be at the small end of that large funnel, I think, is a tremendous opportunity,” Arnold said.

In addition to its more than 250 brokers, Slifer Smith & Frampton employs more than 100 support staff, which Arnold said allows brokers to be more productive.

“Our culture is one of support,” Arnold said.

As the company grows in Denver, Slifer Smith & Frampton brokers will have to guide both buyers and sellers through one of the most competitive markets in Denver’s history, with record-low inventory and rising prices.

“Those who have the listings will win this year,” Arnold said. “So we’re working with our brokers to do a ton of outreach to promote and to solicit listings.”